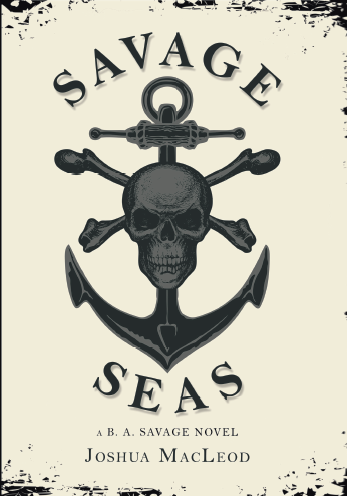 Bartholomew August Savage, aka August, is a former Navy SEAL and ex-French Foreign Legionnaire with a reputation within the higher echelons of society for his marked propensity of waste management.  Whether hunting drug lords and child traffickers or saving defenseless children, Mr. Savage is effective and deadly. But even August has ghosts in his past and demons that need to be kept in check. And nothing is more wicked than the peril he must face in Savage Seas.

Newly hired for a contract hit by a world power to put an end to another terrorist, Mr. Savage is looking forward to getting his teeth into another mission, but things start going awry, and faster than he could have imagined: his mark was killed seconds before he had the opportunity to strike, a secret meeting between a Russian intelligence officer, a Chinese official, and ISIS terrorists in Shanghai, China.

Things aren’t over, though. August encounters missing nuclear warheads, a straw-market of emails leading to ISIS sympathizers, and zealot Americans willing to see the destruction of the UNITED STATES.

Each episode seems discrete and separate, yet Mr. Savage finds the timing disturbing. What are the connections? Is he being baited? With the help of his old friend Marcus L. Guerrero, also a former Navy SEAL and a TEU Unit team leader, the two try to figure out where all this activity is headed, but as they both discover, there is no way to predict where the real threat will be: a hashtag clan of ISIS terrorists that the world never saw coming, just like 9/11.

When Mr. Savage discovers that America’s military might has been ordered to stand down, he sets out on a mission to do what he does best, kill the enemy and save the innocent. Will this bond of two rough men so devoted to their country be enough that their success literally means saving the United States of America from nuclear fallout?